O-glycan profiling provides a wealth of information on pathologies of diseases. However, O-linked glycosylation is challenging to study for many reasons, including glycan heterogeneity, both in terms of monosaccharide building blocks and the linkages and branching of those building blocks, difficulty in distinguishing glycan isomers, challenging sample preparation required to enrich and purify glycans, and an overall lack of tools to study them. Improving O-glycan profiling and gaining detailed insights from these systems requires reproducible, fast and robust analytical methods.

The analytical challenge for O-linked glycans

Glycosylation, one of the most prevalent types of post-translational modifications, is highly important for myriad cellular and developmental events, including cell adhesion and endocytosis[i]. O-linked glycosylation is a major form of protein glycosylation, where a sugar molecule is attached to serine (Ser) or threonine (Thr) amino acid residues. Because overexpression of these glycans is correlated with the development of numerous malignancies, many scientists are trying to characterize O-glycan profiles.

Despite the importance of O-linked glycosylation, it remains very difficult to investigate. There is no universal enzyme for O-glycan release from proteins. Furthermore, certain classes of glycoproteins, such as mucins, have high densities of clustered, heterogeneous O-linked glycans in specific domains, making them particularly hard to analyze.

Some techniques have emerged to help address the need for reliable glycan profiling methods. HPLC-based solutions, for example, have been utilized, as they can be used with mass spectrometry to provide separation and characterization of complex mucin O-glycans.

Alternatively, high-performance anion-exchange (HPAE) chromatography, a type of ion chromatography, can also be used in the structural characterization of mucin O-glycans. With HPAE, glycans of different sizes, charges and linkages, as well as positional isomers, can be separated for effective O-glycan profiling. HPAE chromatography using an electrochemical detector (ED) operating in pulsed amperometric detection (PAD) mode can also be hyphenated to a mass spectrometer (HPAE-PAD-MS). This type of analysis is highly complementary to LC-MS approaches, capitalizing on different solvents to allow access to the acidic glycome. Additionally, the unique selectivity of the Thermo Scientific™ Dionex™ CarboPac™ suite of columns for HPAE results in a significantly improved resolution between previously problematic analytes. Overall, HPAE-PAD-MS provides additional, complementary data to conventional LC-MS approaches, and when used alongside LC-MS, the combination of approaches facilitates a more holistic understanding of the glycan sample than each approach achieves alone.

We recently reported a workflow for O-linked glycan profiling using HPAE-PAD-MS in an application note.

The O-linked glycans in this study were released from porcine gastric mucin glycoproteins using reductive β-elimination and separated on the Dionex CarboPac PA300-4µm column. The O-linked glycans were analyzed sequentially by an ED operated in PAD mode followed by Orbitrap detection in the mass spectrometer.

We identified a diverse set of structures that varied both in size and linkage position (Figure 1). O-glycans predominantly eluted in well-defined groups: small, neutral O-glycans were eluted first from 4.2 min to 32.4 min; sialylated O-glycans eluted next between 33.1 to 35 min; and finally, sulfated O-glycans eluted last. The compositional identification of these O-glycans is shown in Table 1.

Figure 1: Comparison of MS base peak chromatogram (BPC) (a) and ED chromatogram (b) of O-linked glycans released from porcine gastric mucin type III. Both chromatograms were obtained from the same injection, with BPC showing an expected minor delay in retention time. 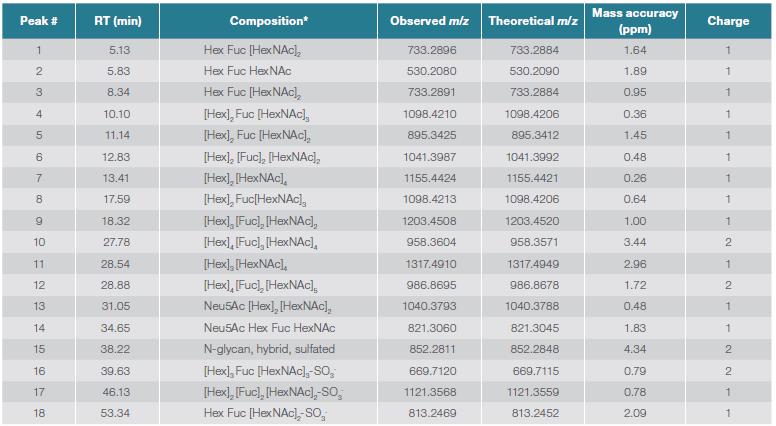 Different isomers have diverse biological functions, so determining a glycan’s isomeric form is vital to understanding how it affects a biological system. The Q Exactive mass spectrometer aids in obtaining information to help characterize glycan isomers. In MS/MS experiments, parent glycan ions are dissociated to generate informative fragment ions, enabling the differentiation of parent ions with similar masses. For example, two isomeric structures of O-glycans with the composition [Hex]2 Fuc [HexNAc]3 were fragmented (Figure 2). Both isomers had Fuc (α1-2) Gal present (indicated by 1,3AGal at m/z 205.0719), but Y1α/Z2β at m/z 366.1416 and Z2α/Z1β at m/z 389.1547 suggests a core 2 structure for isomer 1 (Figure 2a). Conversely, the presence of fragment ions Z2α /Z1β at m/z 389.1571, Z1α at m/z 569.2222, and Z2α at m/z 772.3041 suggests a core 4 structure for isomer 2 (Figure 2b).

For structural characterization of diverse, label-free O-glycans in a single sample, HPAE-PAD-MS is an extremely powerful technique. HPAE provides excellent separation for subsequent electrochemical detection. Additionally, downstream MS and MS/MS detection allows for glycan structural annotation. The technique is also versatile, as it can be used to investigate both O-glycans and N-glycans from other glycoproteins and free oligosaccharides.

To learn more about the HPAE-PAD-MS method for structural characterization of mucin O-linked glycans, read our application note and keep your eyes peeled for our next blog post, where we’ll discuss improved carbohydrate analysis of agave syrup.

Most people think IC-MS is just with conductivity for basic anions and cations. It's great to learn that you can characterize O-glycans to this extend to better understand them! Definitely food for thought.