Do All Your Yogurts Taste the Same? If Not, You Need a GC Orbitrap 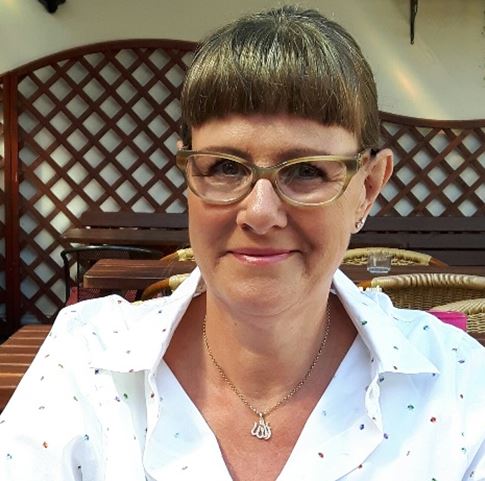 The food industry spends a lot of time and effort analyzing products for their flavors and off-flavors. This analysis is very important since we all like our products to consistently taste the same.

In the last few years, we have seen a tendency in the food market to go toward vegan products and lactose-free products. The composition of vegan food is always based on a plant, but not all plants taste the same. For example, soy and lupine — in some people — cause a bitter aftertaste. Since our taste buds are all different, not every one tastes the same thing.

This is where off-flavors come in. Off-flavors are considered those that are “not tasty,” ranging from bitter to rancid. If you buy a strawberry yogurt, you may want it to taste the same whether it is dairy or plant-based. This is often not the case. For the food industry, consistency in taste is a very important factor, since they don`t want their products to sit on the shelf.

Are you familiar with the smell of fresh-cut grass? I suppose we all are. But so far, no one has been able to detect, on a gas chromatograph (GC), what the composition of this smell looks like.

And this is where the GC Orbitrap technology comes in.

The perfect analytical technology for very low concentrations of flavors 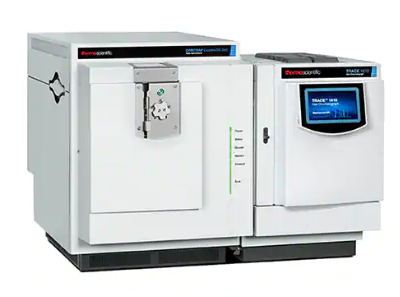 Fig. 1: Orbitrap Exploris GC 240.For years, analysts have tried to run flavor analysis on single-quadrupole GC-MS — not always with success. Due to the nominal resolution of these instruments, the selectivity and sensitivity are not given to detecting very small amounts of flavors. Keep in mind, the human nose detects much better than many analytical instruments.

This changed when the first GC Orbitrap was introduced to the market.

Now you can transform your GC-MS results. The Thermo ScientificTM Orbitrap™ ExplorisTM GC with high-resolution mass detection (HRAM-mass spectrometry), in combination with the Thermo ScientificTM Compound DiscovererTM software (CD), allows you to find even the smallest peaks automatically and perform a statistical comparison.

From qualitative to quantitative analysis, you can do this with a wide dynamic range and highly selective full-scan spectra with a resolution of up to 240.000 (at a m/z value of 200), and a mass accuracy under 1 ppm with a sensitivity of 1 ppb in a matrix loaded sample.

From sample to result

The GC oven program was performed on a Thermo Scientific™ TRACE™ 1600 gas chromatograph starting at 35°C with five-minute holding time, with 8°C/min to 140 °C, with 25 °C/min to 240 °C. The total run time was 30 minutes. While the program ran, the next sample was already conditioned, and analysis was performed in an overlapping mode.

The scan range on the GC Orbitrap was from 50–700 da. Then, 1 million ions were let into the mass analyzer.

Measured samples and the beauty of statistical comparison

The different yogurts measured were marked in the chromatograms as follows:

The first chromatogram shows the TIC (total ion chromatogram) of yogurts and a blank with lab water. 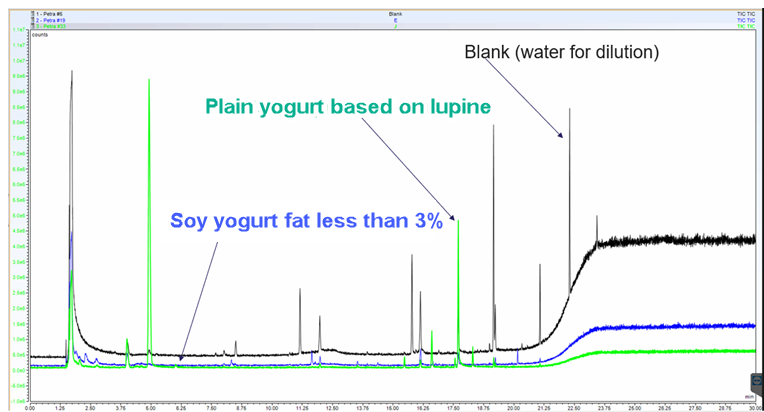 Fig.2: TIC of blank and yogurts.

The chromatogram shows the issues we were dealing with. There were compounds in the blank water, the same water used to dilute the yogurt samples. Also, the concentration of the compounds of interest was very small. On a single quadrupole, these peaks would be very hard — if not impossible — to detect. This is where the power of HRAM mass spectrometry and Compound Discoverer came in. Fig. 3 shows the workflow tree in CD. 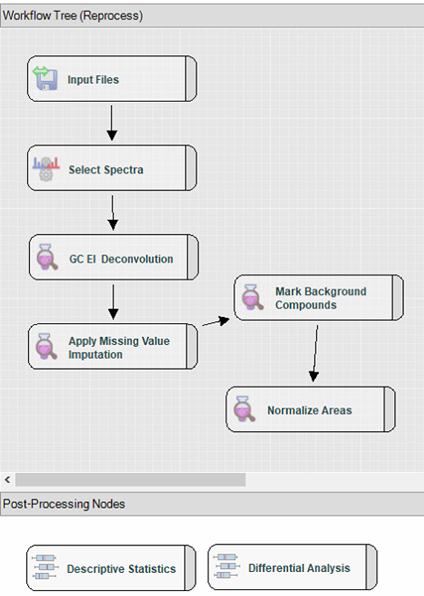 How is this going to help us identify the unknowns as well as perform a statistical comparison? Fig. 4 shows different yogurt samples in comparison and the identification on the exact m/z for 2-Pentyl Furan. This is a compound that results when soy beans are slightly autoxidized. As the differential analysis on the substance shows, this could only be found in significant amounts in plant-based yogurts (soy bean).

Fig 4: Comparison of different yogurts and identification of 2-Pentyl Furan.

Another example is the identification of Z-Hexene, in Fig. 5, in which a differential analysis is shown. The volcano plot in the lower right side of the figure allows a quick overview. What is inside the squares is relevant information, concerning the log-fold change and statistical significance. More to the right side, Z-Hexene could be identified, which could be found in lactose-containing dairy products. More to the left side, Hexane was found in plant-based yogurts. The log P value(y-axis) describes the statistical relevance. The Log Fold (y-axis) shows the amount of Z-Hexene. Below the colored squares, the background is shown. Most of the analytes found in the yogurts were in the background.

Fig. 6 shows the identification of Dimethyl Sulfide. The NIST comparison is with a SI of 954, — which is very good — and a high resolution of 100%, resulting in a combined score of 99.1%. This ensures accurate identification. Also, the measured mol mass versus the theoretical mol mass is taken under consideration. The deviation is very low, with less than 1 ppm (0.71 ppm). M+ was found both in the library and in the sample. This shows how precise HRAM works in the favor of identification and security of the results. The software also takes into account whether the EI-spectra contains molecular ions or not.

Here, the total amount of compounds, without background, are shown. Milk-based and plant-based products show significant differences in the cluster. 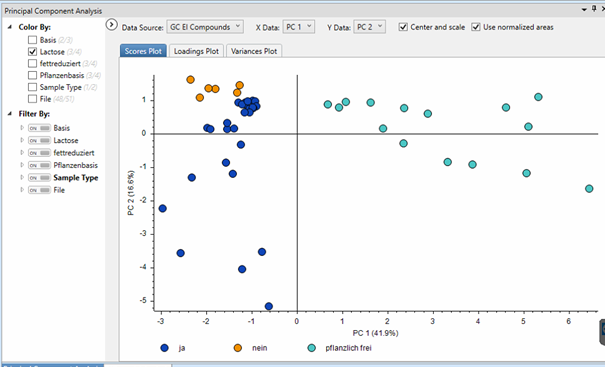 Fig. 8 shows the relevant substances found from CD that are not in the background. Fourteen specific substances could be found after background subtraction. All were very small peaks in the TIC. The treatment of the yogurts might have an impact on the possible VOC entry. Some substances can also come from the water source, as seen in the blank from the used lab water.

Headspace is an easy sample preparation for volatile compounds. The examples here show yogurts from different sources. However, vegan meat, vegan cold cuts and other vegan foods can be prepared and analyzed the same way.

Using HRAM, the examples showed that outstanding sensitivity and selectivity could be accomplished compared to a nominal mass instrument. The statistical comparison is fully automated in CD as well as the deconvolution and the evaluation of the exact mass. This is a very secure workflow for the identification of substances.

The PCA shows all differentiators at one glance, and a fully automated background subtraction can be performed.

When will the GC Orbitrap with Compound Discoverer move into your lab to detect your flavors and off-flavors?